Posted on September 8, 2013 by Harvest of Joy Farm LLC

September already! We’re two-thirds of the way through harvest season with our fingers crossed for a couple more months of good produce to come. Over the next month, the contents of your boxes will likely change again, with the fruits of summer giving way to cool season roots and greens. The cucumber vines, which have produced valiantly under stressful soil conditions, have just about exhausted themselves, so this may be our last week for those. We’ve still got a nice variety of tomatoes ripening, for which we feel extremely grateful since we’ve heard numerous reports of late blight in area tomato and potato crops. Late blight is caused by a fungus that doesn’t over-winter in our area, but can travel vast distances through the air and reach us in that way. It can wipe out a healthy crop in a couple of weeks. Have you heard of the Irish potato famine? That was late blight.

We’ve planted several tomato varieties that are supposed to have some resistance to the late blight pathogen and we’re providing our vines with extra nutrition through foliar sprays to keep them healthy and applying beneficial bacteria that colonize the leaf surfaces and crowd out pathogens. That’s about all that we can do without resorting to chemicals that would be detrimental to our health and the health of our soil. We don’t have late blight yet, but we’ve done what we can to prevent an infection should the fungus arrive in our fields.

The other pests we’ve been combating recently are the Japanese beetles snacking on and mating in the bean and soybean crops. Sheesh, there are a lot of them this year! We’re picking them off by hand and drowning them in jars of water, but they just keep coming. Thankfully, our plants are pretty healthy and seem to be doing well even though some of their leaves are turning to lace.

Speaking of beans, here’s a recipe for spicy dilly beans from Liesl and Myles Petersen that appeared in motherearthnews.com. Adjust the spices to taste and the quantities based on the amount of beans that you want to do. If you don’t want to go to the trouble of processing the cans in a water bath, they will keep for awhile in your refrigerator, just like the cucumber pickles.

Wash up the beans and trim to fit your jars. Heat vinegar, water and salt in a pot to just before boiling. Place one garlic clove, one chili pepper (or 1/2 tsp dried), a few sprigs of dill (or 1/2 tsp dried) and several peppercorns into each hot sterilized jar. Pack jar with trimmed beans and fill with vinegar mixture leaving 1/2 inch head space. Process in a boiling water canner for 5 minutes (adding additional time according to altitude in your area.)

Another thing I really love to preserve this time of year is tomato soup. It’s so good on cold winter nights! But it’s if you adjust the quantities down, you can make a small batch for dinner on one of the cool evenings predicted for the coming week:

Blanch tomatoes, then dunk in ice water to cool. Slide off skins and chop. Cook together with the other veggies for 20 minutes at a soft boil. Stir to prevent burning. While the veggies are cooking, mix together the flour, butter, sugar, and salt. Add this to the vegetables, stir, then bring to a boil. Pour into sterilized jars and seal. Process 15 minutes in a water bath canner. Or skip the canning step and just eat! I like to add some chopped herbs into the mix too, usually basil or oregano, and sometimes I’ll add pasta for a heartier soup.

How about some roasted eggplant sandwiches to go along with your soup? These are so, so good!

Preheat oven to 450 degrees F. Toss the eggplant, onion, olive oil and salt together in a large bowl. Spread the coated veggies on a lightly oiled baking sheet in 1 layer. Shake the pan to make sure the vegetables lie flat and have the maximum possible surface area exposed.

Roast in the oven for about 20 minutes, or until the veggies become soft and fragrant. With a spatula, flip the vegetables so that they brown on the opposite side. Return the baking sheet to the oven for another 10-20 minutes or until the vegetables are caramelized and browned. Transfer the caramelized vegetables to a large bowl and toss with the lemon juice until thoroughly coated. Sandwich between two slices of your favorite bread and eat! This is really nice with some fresh cheese and/or a hummus or pesto spread.

As for those zucchinis in your boxes, this has been my favorite zucchini bread recipe ever since I was a kid:

Beat eggs. Add grated zucchini, sugar, oil, and vanilla to eggs and mix well. In a separate bowl, stir together flour, salt, baking powder, and cinnamon. Combine with wet ingredients, then mix in nuts, raisins and coconut. Pour into greased loaf pans and bake at 350 degrees F for 45 minutes.

Finally, John wants me to remind you that it’s a good idea to wash your veggies before eating them. He was picking cherry tomatoes this morning and noticed that some of the riper ones had split after our recent rain, leaking juice down onto the other tomatoes and making them a little sticky. As much as I’d love for us to be able to wash each of your cherry tomatoes individually for you, we just don’t have that kind of time! We do try to clean off any vegetables that are especially dirty, but it’s a good idea to give everything a good rinse once you get it home.

Have a great week, everyone! And good luck to all of you headed back to classes.   Amy 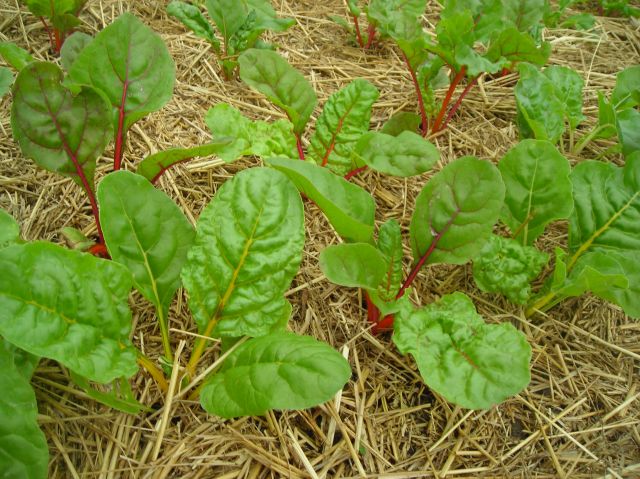 Rainbow chard, coming soon to a share box near you!

About Harvest of Joy Farm LLC