Welcome to Week 7! We’re a third of the way through the season and the produce you’re receiving will be changing during the next couple of weeks as leafy greens wither in the heat and plants such as cucumbers, summer squash, peppers, and tomatoes begin to ripen their fruit. This weather is pretty hard on the salad mix and it looks like we’ll barely squeeze out one last picking this week. We’ll replant it again in late August when the nights start to cool.

We’re continuing to mulch and trellis and have also been busy with insect control this week. Japanese beetles are out in full force, munching holes in the bean plants. Tomato hornworms have hatched and set to their work of tomato plant defoliation. So far, we’ve just been hand-picking the beetles, but we’ve used an organically approved bacterial spray which is non-toxic to humans and beneficial insects but lethal to caterpillars against the hornworms. It’s called bacillus thuringiensis, often referred to as Bt, and we also use it on the brassica crops such as broccoli and cabbages to try to control cabbage worms.

Speaking of cabbages, we’re picking the last of them as well this week. Some of you may be sad about this, while others may be feeling relief! One aspect of being a CSA member that I think many people find both challenging and satisfying is figuring out how to make the best use of a bumper crop of a particular vegetable. Adapting our eating patterns to the crops of a particular season brings us a little closer to the relationship that most of our great grandparents had with food. When crops failed, they didn’t have the luxury of importing food from elsewhere, so they simply didn’t eat that food that year. When crops flourished, they got creative and figured out how to make the most of them.

My mom and aunts remember my grandmother making big crocks of sauerkraut with her extra cabbages and serving it in the winter with pig hocks and pork steak, reminders of her German heritage. I haven’t mustered the ambition to try sauerkraut yet, but on hot days like today, coleslaw sounds good to me. Here are a few variations:

Shred a head of cabbage, 1 or 2 carrots, and a small onion or bunch of scallions. Place in a large bowl. Top with any of the following dressings.

Some people make coleslaw dressing with vinegar, water, and sugar. Others add their favorite herbs, like cilantro. Go nuts. Whatever dressing you end up making, pour it over the chopped vegetables, mix thoroughly and then chill them in the fridge for an hour before serving.

Another cool recipe is cucumber raita, an Indian dish often served along with hot foods to cool the palate.

Peel and cut cucumber into thin slices. Toast the cumin briefly over medium-high heat, then stir it into the yogurt. Add the minced garlic or onion, salt, and cilantro leaves. Combine with sliced cucumbers, sprinkle with cayenne or paprika and chill before serving.

I think that you almost can’t beat fresh snap beans just steamed lightly and topped with butter or a good quality olive oil and salt. But if you want to get a little fancier, here’s a recipe from Jane Brody’s Good Food Book that sticks with this week’s cold salad theme:

Steam beans until tender-crisp, about 5 minutes. Place the beans, chickpeas, onion, and feta (if using) in a large bowl. In a small bowl, combine the vinegar, garlic, oil, basil, salt, and pepper. Add this dressing to the beans, tossing to coat. Chill for at least an hour before serving.

Finally, a note about storing herbs, particularly basil. I treat my herbs like cut flowers—I trim their stem ends and put them in a jar of water on my table so that they’ll stay fresh as long as possible. Basil in particular does not like cold temperatures and will wilt and blacken in the refrigerator. If you find you aren’t using up your fresh herbs over the course of a week, you can preserve them by making herb butters or oils and putting them in the freezer. Just put the clean, dry herbs (with tough stems removed) in a food processor along with butter or olive oil. (Use approximately 1/3 cup olive oil for every 2 cups herbs or 1 stick of butter for approximately 4 Tbsp herbs. You can also add some garlic.) Process into a chunky paste, then package into quart ziplock containers for freezing. Put 1 cup herb oil or ½ cup herb butter into each bag, then flatten the bag so that the oil or butter freezes in a thin sheet that you can break chunks off from to use later in soups or stir-fries.

The honey is a gift from my parents, John and Carolyn Buskirk. It’s not organically produced, since honey is another one of those products that’s very difficult to produce organically both due to the amount of chemical pesticides that bees encounter in the environment and the difficulty of keeping them healthy using organic methods.

We managed a last cutting of salad mix for Monday shares, but the mid-week heat did the rest of the crop in and we weren’t able to include it in Thursday shares. Instead of the salad greens, Thursday folks received extra quantities of cucumbers and summer squash. 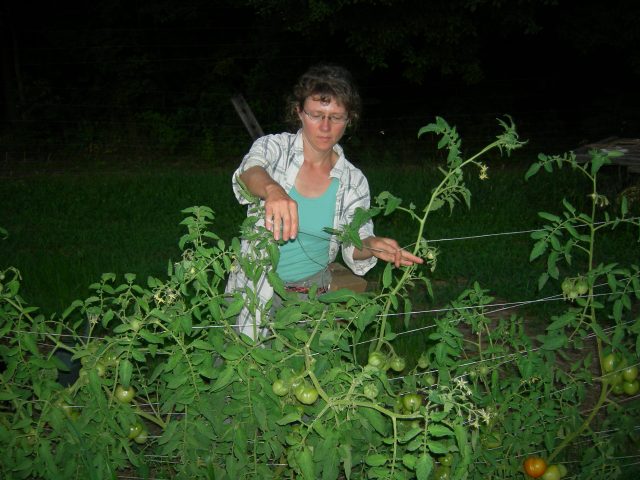 About Harvest of Joy Farm LLC